Do you sometimes wonder how your life would look like if you made a couple different choices? Would your life truly be better?

The Midnight Library by Matt Haig

In The Midnight Library, Nora is terribly unhappy with her life. She lost her job, she’s estranged from her brother, her best friend is far away in Australia, and she walked away from her fiancé two days before she was about to marry him. At age 35, she is already living a life full of regrets and feels like it too late to make a change. And to make matters even worse, her beloved ginger cat Volts was found lying dead on the side of the road. She feels there is nothing to live for.

She takes an overdose of antidepressants and her world goes black.

What if your life told a different story?

Nora wakes in a library. The Midnight Library, a place between life and death, where people go when they find themselves barely hanging on to life. The endless shelves are filled with books, with each book telling another story of how her life could have been.

Every life contains many millions of decisions. Some big, some small. But every time one decision is taken over another, the outcomes differ. An irreversible variation occurs, which in turn leads to further variations. These books are portals to all the lives you could be living.

The Midnight Library gives Nora the chance to jump into all the lives she could’ve lived. What if she pursued her career in swimming and made it to the Olympics? What if she decided to follow her best friend to Australia? What if she went on a date with the guy who asked her for a coffee? 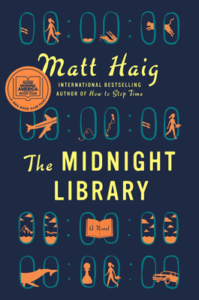 While experiencing all these different life choices in The Midnight Library, Nora finds out that no timeline is perfect. But she also comes to realize that she is not ready to die yet. Throughout the book, she goes from suicide to closure, and comes to terms with all her regrets.

She might have missed those particular opportunities that led her to become an Olympic swimmer, or a traveler, or a vineyard owner, or a rock star, or a planet-saving glaciologist, or a Cambridge graduate, or a mother, or the million other things, but she was still in some way all those people. They were all her. She could have been all those amazing things, and that wasn’t depressing, as she had once thought. Not at all. It was inspiring. Because now she saw the kinds of things she could do when she put herself to work.

The book is filled with psychological quotes (as Nora took a major in psychology) and constantly makes you reflect on your own life. As Nora tries out different lives, you are left wondering: what if I had made a different choice? How would my life have turned out differently? And it is not just the big choices, like picking a different major, moving to a new country or applying for that job your friend told you about. There are many tiny decisions that we make everyday that create a different timeline that could have been. And more often than not, we are not capable of fully understanding the impact of our decisions.

The author of The Midnight Library, Matt Haig, went through a depression of his own. At 24, he wanted to kill himself. Now a novelist, he teaches the readers of his books how to get through when the future looks bleak. In his memoir Reasons To Stay Alive, he openly writes about his life experiences of living with depression and anxiety disorder. It is a real story of how he learned to appreciate life in all aspects while dealing with depression. The book is divided in 5 chapters: Falling, Landing, Rising, Living, Being. In the final chapter, Matt has learnt to accept his depression and appreciate life

In the very first level of the Game of Life, you find yourself lost at sea in the middle of darkness. This makes you think back to your past, when you were still in the safe haven of your parents. You start to wonder: How did I lose track of my direction in life? What happened to my childhood dreams?

You are on the verge of depression, but you decide it is time for action! The dark clouds that surround you shift, and a glimpse of the moon outlines your reflection. You are guided to reflect on your past and present, the first step of becoming a better person.

Hi! My name is Daniel, the founder of FreshSaga. I write accessible and fresh articles about self-improvement. Also check out the interactive story games that I made or FreshSaga's YouTube channel. Hit me up by Email or Instagram.