I think there are a couple flaws in how we were taught and how we are teaching children at the moment.

If you look at it, schools are run like factories, with the most relevant output being the number of graduates. We assess knowledge with artificial tests and complex grading schemes, that reward cheating and half-assed efforts. We learn it is important to get good grades, regardless if we actually learned something.

And when we’re done studying, we find that the content of our studies has a poor fit to actual jobs. As a result, more and more companies find different ways to assess an applicant’s skills, rendering our diplomas worthless.

There should be better ways to educate our children.

And ask yourself this question: What did you learn in the past year?

How Education Has Failed Us (part 1 of 3)

Below you’ll read the first chapter of FreshSaga’s education series. In this first part describes how our education is built on military principles and how the government decides what we learn at schools. The second chapter will explain what is wrong with the current schooling system and how it is different from independent learning. The third chapter will tell you how to break free from the learning methods we got taught and how to use the internet to your advantage in teaching yourself.

In this first chapter, you will find:

Contents hide
How Education Has Failed Us (part 1 of 3)
Intro
Spartan times
Agoge, the first mandatory education
Cloak-and-dagger
The messy journey to Spartan citizenship
Girl, show me your education
Alma Mater
Education in the 19th and 20th century
What if Russia starts with a P?
Govern-mental influence
Next up
Essential Personal Development Tips In Your Inbox
📺 Get a 3-minute insight bite
📄 Key ideas from 2 self-improvement articles
🤯 and 1 eye-opening quote
Play the Interactive Story

I believe that the current educational system is failing, and it is severely flawed in many aspects. A college diploma will become obsolete in the near future. The internet is a better educator in terms of accessibility, availability and teaching methods, and will replace our lecture halls, class rooms and libraries. Everyone will be able to pick their own mentor, find the way of learning that suits them best and meet peers that have the same intrinsic motivation and interest.

Let’s take a look at how we got to our system for education, what’s wrong with the current system and what education will look like in the future.

Let me take you to the south of Greece, to the peninsula of Pelopponnesus. Back in ancient times, this region was home to the city-state of Sparta. Together with Athens, Sparta was one of the dominant forces in the 700s – 400s BC, both in terms of culture and military power. It was a unique place, even to Greek standards. Sparta was known for its social system and constitution that focused on maximizing military training and physical development. Sparta was the first Greek city-state to implement a system of mandatory education, unlike the public curriculums found in Athens and other parts of Greece. 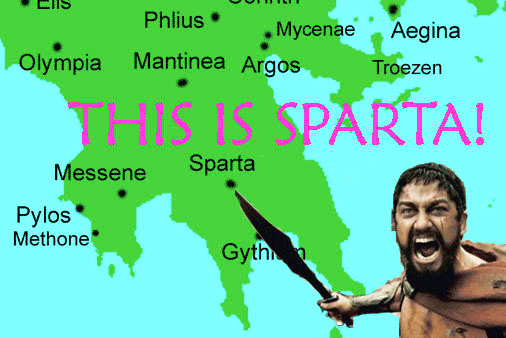 In Sparta, compulsory education was called agoge. Every Spartan man was obliged to take part in this education and training program, except for the first born sons of the kings. However, they were allowed to take part if they wanted to, and this would give them more prestige for when they ascended the throne.

At the age of 7, boys would be sent to agoge. They were taking away from their parents’ homes and they would live in so-called messes. These were communal barracks were they ate, slept and received training. They would be assigned to a paidonómos, a “boy-herder”, who would supervise them. This began the first of three stages of education: The first stage was called Paídes, for 7 to 17 year olds, then two years of paidískoi and during their 20s they would be in the final stage called hēbōntes. During this last stage, the students would be a full member of the Spartan army.

Education was aimed at creating strong and tough men that could stand their own in times of battle. Training involved military training, hunting, athletics and the system cultivated a sense of loyalty to the Spartan regime. But also some activities that wouldn’t be of much help on the battlefield, such as dancing and singing. The fact that students lived together strengthened their bonds and encouraged conformity. There was a strict discipline.

Beginning at the age of 12, boys would only receive one piece of clothing per year, a red cloak. They were forced to sleep outside and make their own beds out of reeds, with only that single cloak to guard themselves against the cold winters. They were purposefully underfed, so they would be accustomed to hunger. This way hunger wouldn’t be that much of an issue during wars. They were encouraged to steal food, but were severely punished with a whip if they got caught. Their instructors and other older men would instigate fights, so the students were encouraged to determine the strongest member of the group. There are stories of 12-year old students having to present themselves to their elderly father figure to engage in a sexual relationship, but this section of history is disputed.

The messy journey to Spartan citizenship

At the age of 20, a voting would take place to assign students to one of the messes. This vote had to be unanimous and rejected candidates could try to gain entry to another mess for another ten years. If someone failed to become part of a mess by the age of 30, he would not be granted full Spartan citizenship. Becoming a soldier was the only occupation a male could choose and they would serve the army until the age of 60.

Girl, show me your education

Spartan girls also had a form of state education, which was also rather unique in those days. Their training involved gymnastics, athletics, music, dancing, poetry, writing and war education. Unlike their male counterparts, girls were allowed to stay at home with their mothers. Girls were also encouraged to become strong and healthy, and they could prove their fitness in athletic competitions. Girls could attend certain religious and state ceremonies, where they would ridicule boys of the agoge, by singing choral songs that shamed their performance. This was meant to encourage boys to step up their game.

The state urged men to marry at the age of 30 and women at 20. If they would marry before, they would have to live separated, because men were required to live in their messes until 30. Marriage was primarily a means to create new soldiers. Where men were raised to become warriors, women were raised to give birth to warriors.

Education in the 19th and 20th century

The Spartans organized education around military principles. But is that so different from ours? If we jump ahead in time, we can see that – not coincidentally – our educational system also has military roots.

What if Russia starts with a P?

We head over to the beginning of the 19th century, to Prussia. Prussia was a prominent state in Europe and was ultimately dissolved in 1947 after the second World War. What used to be Prussia is now mainly located on the territory of Germany and Poland, along the southeast coast of the Baltic sea.

In 1806, the Prussian army were slow to respond to an attack by Napoleon’s troops in the Battle of Jena–Auerstedt, and Napoleon scored a victory. On paper the Prussian army was greater in number and better equipped, so the defeat was considered to be a humiliation. The Prussians believed the defeat was due to a lack of discipline and therefore devised a plan train the population. The idea was to foster obedience through compulsory education. The reforms that followed turned Prussia into a modern state, and laid out the foundation for our current educational system.

As other countries adopted similar compulsory schooling laws, and as time passed, the goal of turning infants into infantry faded. But across countries, the government has always had its finger in the pie when it comes to education. In many countries, education is compulsory up to a certain age; in the Netherlands, everyone is subject to compulsory education up to the age of 18. Besides our parents, the government thus provides a universal education. In almost all countries education is financed by the government. They determine the budgets, the teachers’ salaries and finance the buildings. By means of subsidies, they can make education affordable, and in some countries even free. They tell us what we have to learn and how to test what we know.

In the next chapter, we’ll dive deeper into the content of our current education. How do we measure what children learn? How do we determine what needs to be taught? And what are some often overlooked benefits of regulated education?

📺 Get a 3-minute insight bite

No advertisements. No spam.

In the very first level of the Game of Life, you find yourself lost at sea in the middle of darkness. This makes you think back to your past, when you were still in the safe haven of your parents. You start to wonder: How did I lose track of my direction in life? What happened to my childhood dreams?

You are on the verge of depression, but you decide it is time for action! The dark clouds that surround you shift, and a glimpse of the moon outlines your reflection. You are guided to reflect on your past and present, the first step of becoming a better person.

Hi! My name is Daniel, creator of FreshSaga. I write accessible and thought-provoking articles about self-improvement. Also check out the interactive story games that I made or FreshSaga's YouTube channel. Hit me up by Email or Instagram.

The Battle We Must Wage Against Algorithms
June 7, 2022

The Real Reason Why You Are Procrastinating
January 23, 2022
Go to Top